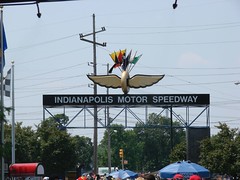 Wayne County has a long history with the Indianapolis 500, and if you read the article in our GoWayneCounty print edition by Carolyn Lafever you know that this is the 100th Anniversary.  Hagerstown IN in particular has a long standing with the 500, since 1911, and will have their own celebrations this year, which are outlined in the print edition as well.

If you are looking for a place to stay….Richmond/Wayne County is your place!

And the events leading up to the race itself are starting already!  Read below to see what is coming this weekend….and we will update you on more events both in Indy at the tracks and in our own Hagerstown IN, Wayne County.

Building on the sucesss of the popular return of hot-air balloons to the Indianapolis Motor Speedway in 2009, the Allison Transmission Centennial Era Balloon Festival will take place on Saturday, May 7, where 33 balloons from across the United States will take to the sky in a “Hare and Hound” race that morning and return to entertain families on the IMS grounds that evening with a Balloon Glow. Both events are free to the public. MORE

The Indianapolis Motor Speedway continues its legacy as an incubator and proving ground of automotive innovation for more than a century through the 100th Anniversary Indy 500 Emerging Technologies Day on Saturday May 7 at IMS. Some of the best, brightest young minds in America will display innovative renewable technologies for the automotive industry on this day. The event will feature exhibition competition at IMS by alternative-power vehicles in the Formula Hybrid Challenge, Formula Sun Grand Prix, and the Purdue evGrandPrix.

Emerging Tech Day will begin at 1 p.m./ET after the 40,000 runners competing in the Indianapolis Life 500 Festival Mini-Marathon have completed their 2.5 mile circuit around the fabled IMS track.

Stay tuned for more updates on events at the tracks and in Wayne County to celebrate the 100th Anniversary of the Indy 500!  And let us know if you have plans to celebrate.

Karole Passmore is a freelance writer who enjoys writing articles and short stories, interviewing local people, and researching non-fiction subject matter– preferably historical. Graduate of RHS, Ivy Tech Richmond, and Earlham College– with a major in History, Karole has spent most of her life in Wayne County and enjoys the quaint atmosphere of a small town.

October In Wayne County: All The Spooky Things

Scary (& not so Scary) Things To Do NEAR Wayne County